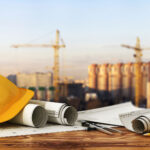 The steel association of India has requested that the government temporarily ban iron ore exports for at least six months in order to relieve domestic supply and allow the situation to stabilize. China is the world’s largest steel producer, and it imports iron ore from countries such as Australia and Brazil to meet its production needs. They’ve been stockpiling ever since the economy began to improve. With mines in Brazil shut down due to landslides and tropical cyclones in Australia, China has turned to India for iron ore supplies. In 3Q2020, 95 percent of India’s iron ore exports went to China, potentially pressuring domestic demand and resulting in a threefold price increase. Steel accounts for approximately 12-15 percent of construction costs, so the sudden increase in rates has a negative impact on both contractors and developers.

Steel prices at the end of each quarter city-wise

Crude oil has recently risen in price, reaching an all-time high of nearly $50 per barrel on the last day of December 2020, inflating the costs of raw materials used in the production of cement, paints, glass, plastics, PVC pipes, and rubber towards the end of the year. In the month of April 2020, crude was priced at $18 per barrel, a significant drop in prices to sell off existing production in the event of no demand. This pressured global oil producers to reduce output in the months that followed in order to avoid further losses, which disproportioned supply and demand, resulting in low supply and increased demand worldwide upon the economy’s resumption, resulting in price spikes.

While global prices had softened in 2020 due to a lack of demand and reduced production, direct government taxation in India had increased, resulting in a minimum of 15 Rs per Liter on Diesel. This increased taxation was in response to the government’s efforts to increase revenue in light of the slowdown and decreased tax collection.

Even with a rise in demand and the highest level of production in 2019, prices rose in 2019. Prices in 2020 fluctuated depending on the circumstances, with rates rising after the lockdown due to supply and availability issues, and rising again in recent months, prompting the Government of India to threaten to impose a price regulator for the sector, indicating cartelization.

In December, the price of aluminum increased after Chinese plants closed, reaching a high of $2,017 per tonne. Following the price increase, some industries, such as automobiles, have raised their product prices. All of this will lead to higher input costs for manufacturers in the coming months. The 25% price increase from 1Q2020 to 4Q2020 is significant, causing turbulence in the construction costs of aluminum-related works.

Copper reached a high of $7,755/tonne in December, up from a low of $5,178/tonne in the first quarter of 2020. This comes in the wake of a strike in Chile, the world’s largest copper miner. Prices, however, have not dropped as a result of a truce reached between the miners and the organization, which may be possible after full-fledged production. A 15% increase in the price of copper and aluminium at the end of the last quarter compared to the third quarter of 2020 is a significant increase for a single quarter. These price fluctuations have an impact on construction components both directly and indirectly.

Since June 2020, India’s PVC imports have been low, and purchasing volumes have decreased significantly. As a result, manufacturers have reduced their production rate, driving up costs and leaving end-users befuddled by high prices. Since last year, prices have nearly doubled. As demand for several polymers exceeds domestic production, plastic manufacturers and processors have urged the government to ease raw material imports and stop imposing barriers such as anti-dumping duties and mandatory BIS standards. They are also requesting a ban on exports until domestic demand improves. Plastics producers suspect that the petrochemical industry regularly raises prices ahead of domestic supply.

The indices were created using the following methodology.

A basket of items comprised of the most common construction materials, labor, and consumables has emerged. There are a number of construction industry items that are known to display inflationary and dynamic characteristics. Individual quantities within the items approximate to represent a standard type of commercial building. Each item received an appropriate weightage, and a base Index created using the weighted average method.

December is used because it represents the best representation of costs before the pandemic’s uncertainty. Bangalore serves as the Index’s starting point. As a result, the indices calculated based on cost movements over similar time periods for various cities.

As shown below, the Construction Price Indexes for four major cities started in December 2019, based on Bengaluru.

The indices jumped 11 percent to 12 percent in the last month of 2020 compared to September 2020. This is due to an unnatural fluctuation in material rates in December 2020. Steel and metal prices have skyrocketed, as has the impact of oil on plastic and fuel costs. As a result of current project instability, unsustainable cost increases have exceeded project contingencies, forcing additional budgets.